Succeeding at Amazon as a Christian (Part 2 of 6)

This is part 2 in a series of posts comparing Amazon leadership principles with Scripture. Today is about Ownership and Invent & Simplify. The previous post was about Customer Obsession and you can see the full list here.

Leaders are owners. They think long term and don’t sacrifice long-term value for short-term results. They act on behalf of the entire company, beyond just their own team. They never say “that’s not my job”.

What does it mean to be an owner?

His master replied, ‘Well done, good and faithful servant! You have been faithful with a few things; I will put you in charge of many things. Come and share your master’s happiness!’ (Matthew 25:23)

You share in the long term risks and rewards of the things under your ownership.

How is ownership different than stewardship?

Although they are different, a good steward always acts in the best interests of their owner, so that the actual behavior is similar.  We had an interesting segue into the history of English trust law.

We also cited John 10:11-13 where Jesus distinguishes himself as the good shepherd who lays down his life for his sheep vis a vis hired hands who don’t inherently care for the sheep.

There are all sorts of reasons for not feeling like an owner:

As Christians, even though we may be hired hands, God is the master. He has entrusted a stewardship to us and our reward is guaranteed by him (Colossians 3:23-24), even if we cannot trace out the connection between the responsibilities we fulfill today with the rewards that come in the future.

God is in fact the owner of all things (Psalm 24:1) and his incredible promise is that we are not merely stewards, but also heirs (owners!) of all things in Christ:

The Spirit himself testifies with our spirit that we are God’s children. Now if we are children, then we are heirs—heirs of God and co-heirs with Christ, if indeed we share in his sufferings in order that we may also share in his glory. (Romans 8:16-17)

How does realizing that God owns everything and that we will one day inherit all things affect how we approach our work and our life? 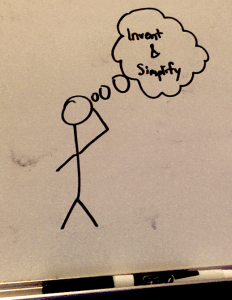 Leaders expect and require innovation and invention from their teams and always find ways to simplify. They are externally aware, look for new ideas from everywhere, and are not limited by “not invented here”. As we do new things, we accept that we may be misunderstood for long periods of time.

How have you seen Invent and Simplify exemplified in Amazon?

Since Day 1, Amazon has been about innovating on behalf of customers. We see it everywhere from building the kindle to deliver a simpler experience for acquiring and consuming content to inventing new ways for sellers to put things for sale on our site.

Are there limits to Invent & Simplify?

Sometimes we make the mistake of reinventing the wheel. We shouldn’t invent for the sake of inventing. Amazon is full of smart people, so it often times seems simpler to solve a problem oneself instead of collaborating and doing the higher level work that can produce simpler and more general solutions. Without invention though, we would lose our edge and also a lot of the fun we have creating (which is very satisfying since God made us to be sub creators).

How has being a Christian required you to accept being misunderstood for long periods of time?

In general any initiative to change the status quo requires being misunderstood for long periods of time.

Jesus was misunderstood for long periods of time by his contemporaries, both opponents (Luke 7:34-35) and disciples (John 13:6-7). If you’re willing to stretch things, one could even say that he “invented & simplified” the way of salvation by solving the problem of sin through his death in our place and introducing righteousness by faith. As believers we may endure prolonged seasons of persecution or being misunderstood before the gospel impacts someone’s life.

How can we apply “Invent & Simplify” to gospel goals?

Consider these words from Johann Gutenberg describing his vision for the invention of the printing press (1455):

God suffers in the multitude of souls whom His word can not reach. Religious truth is imprisoned in a small number of manuscript books which confine instead of spread that public treasure. Let us break the seal which seals up holy things and give wings to Truth in order that she may win every soul that comes into the world by her word no longer written at great expense by hands easily palsied, and multiplied like the wind by an untiring machine.

Inspired? Please leave a comment below! Check out the next post on Are Right, A lot; Hire and Develop the Best; Insist on the Highest Standards.