More than 700,000 people welcomed the Seattle Seahawks from their victory at the Super Bowl. I am proud to say I was one of them. While waiting for the parade to start I was reminded of two stories from the Bible: the story of Zaccheus (Luke 19:1-10) and the parable of the 10 virgins (Matthew 25:1-13). 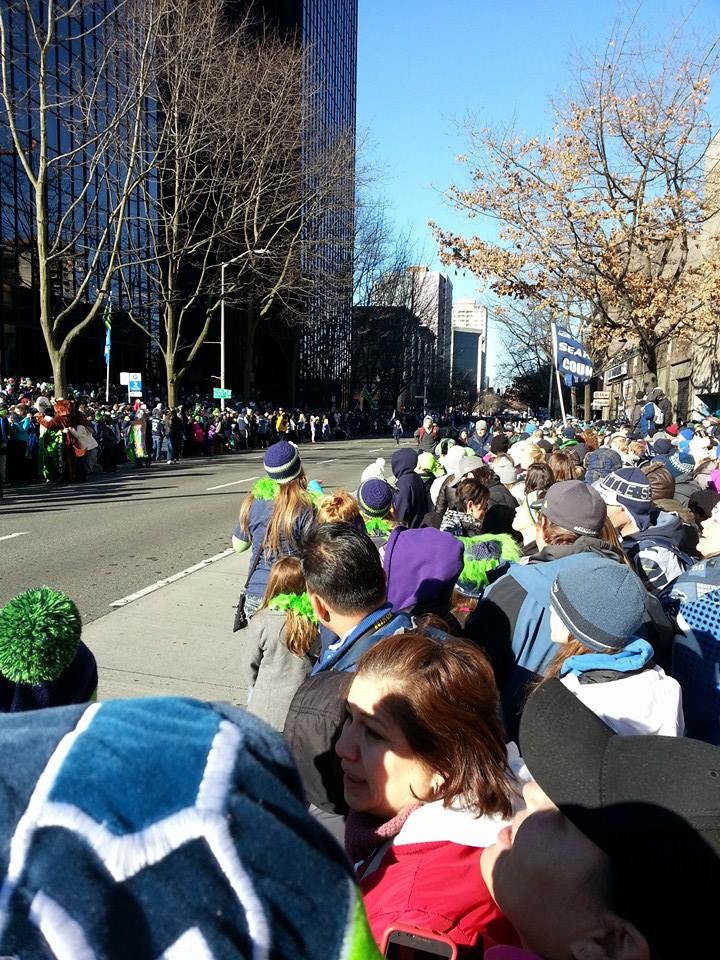 Zaccheus was a short, rich tax collector who wanted to see Jesus as he passed through the city of Jericho.  The crowd completely blocks his vertically challenged view so he runs ahead and climbs a tree.

The Seahawks parade was exactly like this. Some folks climbed honey buckets to get a better view. I resigned myself to holding up my smartphone and sneaking closer and closer to the street as the crowd got antsy.

That aside, I realized that winning the SuperBowl was such an amazing collective experience that all 700,000 of us were willing to wait outside in 25 degree weather just to see and celebrate with our championship team. It helped me feel Zaccheus’ excitement over finally getting to see Jesus–he was so eager to scurry ahead and climb a tree just to get a glimpse. Read the rest of passage to see how that glimpse changed his life.

2. The fans who ran out of juice 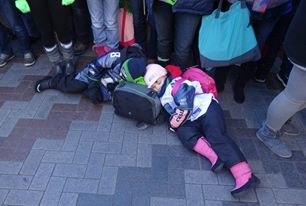 Jesus tells an odd parable about being ready for his return. Ten young women were waiting for a wedding party to get started, which obviously cannot happen until the groom arrives. He takes so long that the women fall asleep. Then suddenly at midnight he shows up, everyone is stirred up, and they wake up. Five of them brought oil to refill their lamps so they can see, but the other five had to go buy fuel. Unfortunately they take too long, miss meeting the groom, and the feast starts without them.

I similarly did not expect the Seahawks parade to be delayed for over an hour. No one in the crowd knew when they would finally show up and we all occupied ourselves with the occasional cheer, random picture taking and browsing the Internet on our smartphones. Someone would call a friend watching TV who would tell them, “The National Guard just put Pete Carroll into a hummer–he should be there in 10 minutes!” and we would all get ready, but 20 minutes later there would be no one would in sight.

Soon my phone chirped the dreaded low battery beep and like the young women in the parable, I wasn’t prepared! By the time Marshawn Lynch, Pete Carroll, and Russell Wilson came around I had to carefully ration the pictures I took to ensure my phone would last until the next celebrity. In the end I was so anxious about my battery that I didn’t really get to enjoy the parade itself.

In the case of the parable, the consequences were more severe–exclusion from the party altogether (I didn’t have tickets to CenturyLink anyway), but missing out on the fun of the parade after waiting over an hour in the cold because I was ill-prepared for the delay is a good way to prod me to be ready for the real event I’m looking forward to.

Thank God we have SuperBowl championship parades to help us relate to and understand the Bible :-).

For from him and through him and to him are all things. To him be glory forever. Amen. (Romans 11:36)