After a challenging 5 months, the motivational actuators are back online and we are resuming progress on our voyage. To my surprise, the most difficult part of the adventure so far has been maintaining focus and motive power. It would have been preferable to journey with a fleet rather than a lone ship, but such is the nature of a pathfinding mission. There was also a month of infection, which damaged our starboard auditory communications capabilities. We were immobile for weeks.

The E.M.O. shields have been battered for months in no small part due to bipolar fluctuations, resulting in several power failures within the ship, but thankfully many of the storms have subsided and we now have time to recover. In the meantime we invested in “capability enhancements” that may prove useful in the future.

We are currently assisting another fleet tasked with networking and mobilizing ships for the Prime Directive by seeding the ecosystem necessary to resource, train and deploy them. A regional launch event takes place in two weeks.

We were recently put in touch with a fleet that was en route to strengthen an alliance with an advanced tech division and they invited us to come along. We discovered some synergies between our missions, but the details need to be worked out and we have asked central command for further instructions.

In the previous post in this series, I briefly shared the TheoTech vision. These are some of the struggles I’ve encountered in pursuit of it.

Feeling like I had little to show for the past months, I couldn’t help questioning myself. Did I make a mistake? No finished product, no customers, no investors, no co-founders. Competition seemingly leagues ahead with an accelerating pace to boot. Several people wanted to recruit me for their work–I wrestled with the allure of progress, ample pay and working with a great team–but having entered this work because of God’s call, it would also take his call to send me elsewhere.

Whenever an interesting opportunity or major setback arose, I remembered these words:

Yet another said, “I will follow you, Lord, but let me first say farewell to those at my home.” Jesus said to him, “No one who puts his hand to the plow and looks back is fit for the kingdom of God.” (Luke 9:61-62)

While some people complimented my guts for leaving a stable job to pursue an uncertain vision, I don’t feel gutsy. There are days when I simply cry out to God admitting that I am unfit for his kingdom and feel like turning back and giving up. On other days I distract myself with short term pleasures so I don’t have to think about it.

I had hoped by this point to have found a disciplined rhythm, served many major happy customers, met a co-founder to labor with or a sage-mentor to teach me or a kingdom investor to fund me. Instead I find myself wavering between depending on God and wanting so badly to have the help of others and then feeling confused over how the two are appropriately compatible (the merit and grace tension).

The truth is that I’m still waiting on the Lord for a breakthrough.

On the one hand, I think there is so much more I could do, which paralyzes me with self-defeating guilt over not doing enough. On the other hand, I believe that if God wants the vision to happen, he must be the one to bring it about, which paralyzes me with resignation over the apparent lack of divine aid. I accept that things take time, but “hope deferred makes the heart sick” (Proverbs 13:12a).

Being alone, in particular, has proven far harder than I ever imagined. Ideas that should be inspiring become overwhelming when they completely fall on the shoulders of one person. Even simple tasks are hard to push to completion without the moral support and assistance of others. Time spent on one task is time taken away from others–and context switching dissipates any momentum in a direction.

I suppose my experience illustrates Ecclesiastes 4:9-10:

“Two are better than one, because they have a good reward for their toil. For if they fall, one will lift up his fellow. But woe to him who is alone when he falls and has not another to lift him up!”

Many people counseled me to wait until I had a team, but believing that I had been called in that season led me to jump anyway, asking God to provide co-laborers and trusting he would provide. While I have been blessed by a supportive community, I still feel the need for people doing the work with me.

In spite of these struggles–the temptation to turn back, to impatiently strive for success, and the craving for company–I must give thanks for what has happened since November. By God’s grace I:

Most recently, I met with the senior leadership of Wycliffe Associates to explore ways to accelerate Bible translation having been connected through a professor I met at Urbana two years ago. For all that has been accomplished, I confess that “it was not I, but God’s grace working in me.”

Unfortunately, when I contemplate these things, I also find myself anticipating disappointment instead of being hopeful. How treacherous! Why is God’s grace towards me producing anxiety instead of thanksgiving?

(affiliate link), I realized that each struggle was simply a lack of trust. The very thing God wants, I withhold–not so much my money, time, labor, or sacrifice, but simply my trust. I want to merit success, to have confidence that I am good enough and deserve to make it, with the progress to prove it. God wants me trust that he is good enough, that his grace will ensure that I make it even though I don’t deserve it, with the Spirit to prove it.

This very act of writing is a fight to believe: 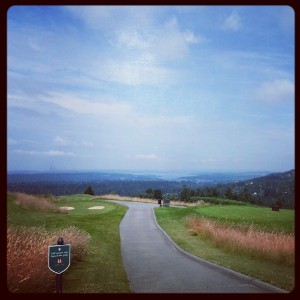 That in my loneliness, God is with me. “This is my command—be strong and courageous! Do not be afraid or discouraged. For the Lord your God is with you wherever you go.” (Joshua 1:9, see context for conditions)

That in my waiting, God will keep his word. “Not one word of all the good promises that the Lord had made to the house of Israel had failed; all came to pass.” (Joshua 21:45)

That in my persevering, God guarantees a great reward. “Therefore, my beloved brothers, be steadfast, immovable, always abounding in the work of the Lord, knowing that in the Lord your labor is not in vain.” (1 Corinthians 15:58)

So can we create Earth’s most God-centered company? A place where righteousness, justice and steadfast love dwell? A place where truth and peace prevail over politics and people compete to show kindness? Can we foster a culture where people flourish in their gifts and where success aligns with the things God cares about most–loving Him and one another? Can we innovate on behalf of the gospel? Can we hasten the return of the King by cultivating the fruit of his Kingdom to the ends of the earth?

“For truly, I say to you, if you have faith like a grain of mustard seed, you will say to this mountain, ‘Move from here to there,’ and it will move, and nothing will be impossible for you.” (Matthew 17:20b)

Faith is the confidence that what we hope for will actually happen; it gives us assurance about things we cannot see. (Hebrews 11:1)

A venture calvinist must walk by faith and not by sight.

Reflection: What goals and dreams are you striving after? What would it look like for you to trust God for them instead?