Succeeding at Amazon as a Christian (Part 5 of 6)

This is part 5 in a series of posts comparing Amazon leadership principles with Scripture. Today’s post is about Vocally Self Critical, Earns Trust of Others, and Dive Deep. The previous post was about Think Big; Bias for Action; Frugality and you can see the full list here.

Today’s leadership principles seem focused on making sure Amazon remains a truth-seeking organization instead of one that succumbs to social cohesion. 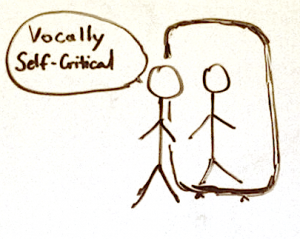 Leaders do not believe their or their team’s body odor smells of perfume. Leaders come forward with problems or information, even when doing so is awkward or embarrassing. Leaders benchmark themselves and their teams against the best.

Have you been tempted to cover up mistakes and bad news?

In our theology of technology group, we shared different situations where we’ve faced this difficulty. It’s tempting to give the appearance that you or your team are progressing more quickly than you actually are, especially when reporting to upper management. It’s tempting to remain quiet while others are telling a rosy story or making promises that are nicer than reality. As leaders, we should speak up and make sure the truth is heard even though we risk making our team (or ourselves) look bad.

When you tell the truth despite its social repercussions, you encourage others to give you honest feedback and many times pre-empt the need for others to criticize you (a sort of corollary to Proverbs 27:2). Of course it’s still possible reject critical feedback outside of the ways you are willing to criticize yourself, so this is not a substitute for peer feedback.

As Christians, we have great freedom to be vocally self critical because the truth about our most depraved condition is fully known God and yet he thoroughly loves us and has given us full access to himself through Jesus Christ (Hebrews 4:14-16). Even though speaking up for the truth can have painful social consequences, we do it because we love the truth and our neighbor (1 Corinthians 13:6). David throughout his Psalms demonstrated a vocally self critical attitude in his confession towards God (Psalm 32) and an opposite would be the hypocritical Pharisees that Jesus condemned (John 8, Matthew 7:1-5).

Earns Trust of Others

Leaders are sincerely open-minded, genuinely listen, and are willing to examine their strongest convictions with humility.

Describe a time when someone in Amazon earned your trust

We began describing two types of trust-earning activities, which seemed to be different than the receptivity described by this leadership principle. The first was a case where a senior developer took the time to teach a junior developer. By explaining his thought process, asking guiding questions, listening and demonstrating the merit of his ways, this developer earned the trust and respect of the junior developer. There are other instances where senior developers may be more pre-occupied with their own work or dogmatic about some point instead of reasoning with and persuading others about their approach. The second way to build trust over time was to under promise and over deliver—basically making and keeping the promises you make over time builds trust.

However, the description for this principle seems to lean toward earning trust by listening to others and being open to their feedback and ideas—a kind of continuation of being vocally self critical. This is particularly powerful when exercised by someone in authority because it is moving along the lines of Jesus’ teaching that leaders are not to lord their authority over others (as expressed by authoritarian stubbornness), but to use it to serve others (Luke 22:24-26, 1 Peter 5:2-4). Even so, it can be frustrating dealing with someone who gives the appearance of receptivity, but ultimately is seeking to manipulate the situation to their advantage or confirm what they already desire (see for example Rehoboam who rejected the advice of his father’s counselors). As believers we ought to be truly receptive and likewise forthcoming in speaking the truth to each other (Psalm 32:9, Proverbs 1:7, Ephesians 4:15, 25).

Leaders operate at all levels, stay connected to the details and audit frequently. No task is beneath them.

What is the difference between diving deep and micromanaging?

Most of the time we’ve seen leaders dive deep at Amazon for the purposes of understanding and accountability rather than in order to directly control every action a team is making. Leaders are willing to dive deep and can quickly get to the heart of a matter, apprising themselves of the true situation. Regularly diving deep creates an atmosphere of accountability because it means that you have to know your stuff when you present and share facts with others.

Why is it tempting to stay high level instead of diving deep?

When we’re under deadlines, it may seem like we don’t have enough time to dive deep and really understand a problem, technology or spreadsheet. There is a balance between knowledge exploration and exploitation, and the intuitions about when to dive deep and when to leave things at an abstract/aggregate level seem to be gained through experience. When you do see a problem, diving deep is a form of taking responsibility since if you choose not to solve it, someone else probably will have to. This is also a way for leaders to earn the trust of others since peers and followers know that you know what is really going on and that you are taking care of it.

How does this relate to Scripture?

My friend Carter pointed out that we are not seeking proof texts in asking this question, but simply trying to reflect on these principles in light of Scripture. Jesus for example did not need to be “vocally self-critical” or “open-minded” in the sense that we do. We didn’t get to really explore this question for Dive Deep, but we know that Christ commanded his disciples to follow his example by serving each other even in the lowliest task of foot washing (John 13). In a sense his mission to seek and save the lost by giving up his own life is God “diving deep” to redeem his entire Creation:

The Word became flesh and made his dwelling among us. We have seen his glory, the glory of the one and only Son, who came from the Father, full of grace and truth. (John 1:14)

How can we overcome the tendency towards social cohesion and promote a truth-seeking culture in our families, churches, teams and wider communities?

Please leave a comment and read the next post on Have Backbone, Will Disagree and Commit; Deliver Results.