Succeeding at Amazon as a Christian (Part 4 of 6)

This is part 4 in a series comparing Amazon leadership principles with Scripture. Today’s post is about Think Big, Bias for Action, and Frugality. The previous post was about Are Right, A lot; Hire and Develop the Best; Insist on the Highest Standards and you can see the full list here.

Thinking small is a self-fulfilling prophecy. Leaders create and communicate a bold direction that inspires results. They think differently and look around corners for ways to serve customers.

How can you think big while remaining realistic?

In Amazon we often test the big ideas with a press release to socialize the idea and gather data followed by a prototype. Oftentimes a big idea may be rejected not because it is flawed, but because the people it is presented to cannot conceive of how it is possible. In such cases a prototype can help people take the idea seriously.

What prevents us from thinking big?

We discussed two types of obstacles: busyness and fear.

It is easy to get trapped in the details of work and lose sight of the bigger picture/possibilities. For developers, the iterative cycle of two week incremental sprints lends itself to forgetting where you are going. To overcome this, some teams schedule brainstorming sessions to take a step back and dream. Using the 5 Why’s can also help uncover bigger ideas.

It is also easy to fear failure or rejection for promoting big and bold directions. Great ideas can be quickly squashed by a desire for social cohesion. In such cases collecting data by experimenting and talking with others can help build up sufficient momentum to overcome these obstacles.

Is it prideful to “Think Big”?

For example, the Psalmist writes:

My heart is not proud, Lord, my eyes are not haughty; I do not concern myself with great matters or things too wonderful for me.
But I have calmed and quieted myself, I am like a weaned child with its mother; like a weaned child I am content.
(Psalm 131:1-2)

Yet, we know God’s plan to save the world and redeem the whole creation is incredibly big thinking:

Then they gathered around him and asked him, “Lord, are you at this time going to restore the kingdom to Israel?”

He said to them: “It is not for you to know the times or dates the Father has set by his own authority. But you will receive power when the Holy Spirit comes on you; and you will be my witnesses in Jerusalem, and in all Judea and Samaria, and to the ends of the earth.” (Acts 1:6-8)

After this I looked, and there before me was a great multitude that no one could count, from every nation, tribe, people and language, standing before the throne and before the Lamb. They were wearing white robes and were holding palm branches in their hands. (Revelations 7:9)

In his parable of the talents, Jesus in fact condemns the lazy servant who takes no risks and gets no return on investment for his master (Matthew 25:26-27). 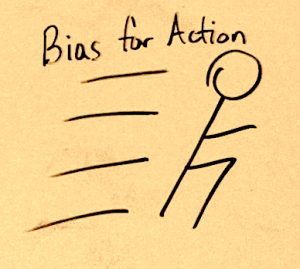 Speed matters in business. Many decisions and actions are reversible and do not need extensive study. We value calculated risk taking.

Why is it difficult to have a bias for action?

It’s tempting to delay decisions until they are made for us because it is scary to take responsibility for an unknown outcome.

For example, Saul faithlessly cowered with his 600 men instead of attacking, while Jonathan by faith exhibited a bias for action and achieved a victory for Israel.

6 Jonathan said to his young armor-bearer, “Come, let’s go over to the outpost of those uncircumcised men. Perhaps the Lord will act in our behalf. Nothing can hinder the Lord from saving, whether by many or by few.”

7 “Do all that you have in mind,” his armor-bearer said. “Go ahead; I am with you heart and soul.”

8 Jonathan said, “Come on, then; we will cross over toward them and let them see us. 9 If they say to us, ‘Wait there until we come to you,’ we will stay where we are and not go up to them. 10 But if they say, ‘Come up to us,’ we will climb up, because that will be our sign that the Lord has given them into our hands.” … 13 Jonathan climbed up, using his hands and feet, with his armor-bearer right behind him. The Philistines fell before Jonathan, and his armor-bearer followed and killed behind him. 14 In that first attack Jonathan and his armor-bearer killed some twenty men in an area of about half an acre. (see full story at 1 Samuel 14:1-14)

How does a bias for action fit with waiting on the Lord?

We discussed the nuances of waiting on the Lord vis-à-vis acting, but didn’t arrive at a conclusive summary.

We should not confuse procrastination or avoiding responsibility with waiting on the Lord—sometimes we already know what the Lord wants us to do, but haven’t accepted his answer. An example would be the faithlessness of the Israelites who refused to enter Canaan when the Lord told them to go and then went when he told them “no” (Deuteronomy 1).

On the other hand, many Scriptures that speak of waiting on the Lord connote a restful stillness while he acts on our behalf:

Commit your way to the Lord; trust in him, and he will act. He will bring forth your righteousness as the light, and your justice as the noonday. Be still before the Lord and wait patiently for him; fret not yourself over the one who prospers in his way, over the man who carries out evil devices! (Psalm 37:5-7)

As these various Scriptures illustrate, it seems that there is a place for action and stillness and at the root of both is complete trust in the Lord.

So let us take action, make decisions, and calculated risks by faith in God instead of succumbing to analysis paralysis or anxious toil.

We try not to spend money on things that don’t matter to customers. Frugality breeds resourcefulness, self-sufficiency and invention. There are no extra points for headcount, budget size or fixed expense.

How can a person be frugal and generous at the same time?

We didn’t get to examine the effects of frugality like resourcefulness, but we addressed the principle itself. It seems that frugality is a mindset, which strategically arranges its assets towards its aim. In Amazon this aim is customer obsession—delivering more value to our customers (often in the form of lower prices). As Christians, our aim is God’s glory.

Even though God has unlimited resources, one could argue that he is frugal because his unlimited resources are brought to bear on his strategic purposes by lavishing the elect with the riches of his grace, to the maximal praise of his glorious grace:

3 Praise be to the God and Father of our Lord Jesus Christ, who has blessed us in the heavenly realms with every spiritual blessing in Christ. 4 For he chose us in him before the creation of the world to be holy and blameless in his sight. In love 5 he predestined us for adoption to sonship through Jesus Christ, in accordance with his pleasure and will— 6 to the praise of his glorious grace, which he has freely given us in the One he loves. 7 In him we have redemption through his blood, the forgiveness of sins, in accordance with the riches of God’s grace 8 that he lavished on us. (Ephesians 1:3-8a)

We also see Christ commend incredible acts of generosity in others:

While Jesus was in Bethany in the home of Simon the Leper, a woman came to him with an alabaster jar of very expensive perfume, which she poured on his head as he was reclining at the table.When the disciples saw this, they were indignant. “Why this waste?” they asked. “This perfume could have been sold at a high price and the money given to the poor.” Aware of this, Jesus said to them, “Why are you bothering this woman? She has done a beautiful thing to me. The poor you will always have with you, but you will not always have me. When she poured this perfume on my body, she did it to prepare me for burial. Truly I tell you, wherever this gospel is preached throughout the world, what she has done will also be told, in memory of her.” (Matthew 26:6-13)

Jesus looked up and saw the rich putting their gifts into the offering box, 2 and he saw a poor widow put in two small copper coins. 3 And he said, “Truly, I tell you, this poor widow has put in more than all of them. (Luke 21:1-3)

So, although we did not get to explore all the dimensions of frugality, stinginess and generosity, in the least we saw that it does not mean a generic miserliness. We practice thrift in certain areas so that we can be generous in the areas that matter to God.

How does faith in Christ empower you to “Think Big”, exhibit a “Bias for Action”, and practice “Frugality” for his strategic purposes?

Please leave a comment and read the next post on being Vocally Self Critical, Earning the Trust of Others and Diving Deep.